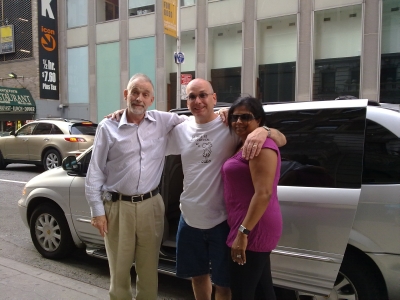 Their first Sunday in the city had been planned as John & Angela's only completely non-training day of their weekend in New York.
Back on the shuttle bus their first port of call was the tour bus once again. Taking a different route this time they ended up at one corner of Central Park. Walking through to the opposite side of the park they had planned to meet KJN John's brother Peter, and his wife, Debbie for lunch.
Peter had arranged to pick them up but this proved a bit harder than John had thought as there is virtually nowhere in New York that you are allowed to stop and there are Police everywhere.
However, they eventually made contact and Peter then whisked them off to lunch at a diner in Queens.
This was another interesting experience, especially when John asked for a "Manhattan" to drink (it was on the menu) not knowing what it was. It seemed though that none of the staff knew either and it took a while to arrive! When it did it turned out to be pure spirit. Good job he had it on the rocks and was not driving that day!
After lunch Angela persuaded Peter and Debbie to show her some more shops before taking them back to Times Square later that afternoon.
The picture shows Peter and Debbie with KJN John in New York 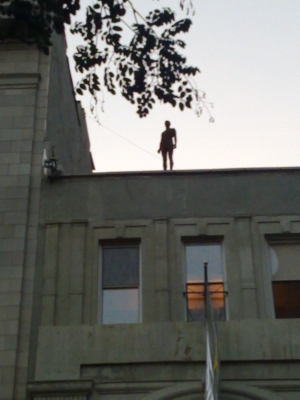 Whilst walking around the city John & Angela noticed some strangely familiar statues perched atop some of the city's tallest buildings.
Apparently they are the work of Antony Gormley, creator of the Angel of the North and the famous "Standing Statues" which look out to sea at Crosby. At first sight they are quite alarming until you realise they are NOT suicide attempts! 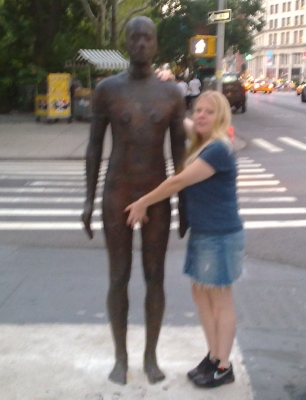 This one was at ground level, and Angela decided he needed to hide his embarrassment!
Not quite to plan....click here....