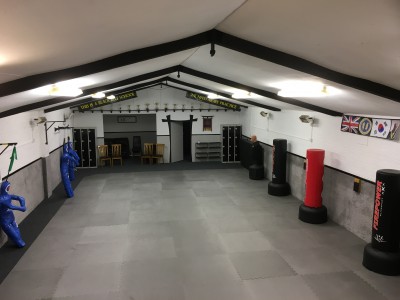 Everyone must agree that 2020 was an unusual year. Covid19 has affected so many on a personal level, and those of us who have escaped its clutches have to be eternally grateful to the health service and many others who worked so tirelessly to keep us safe.
KJN John and SBN Angela were determined not to be brought down by the pandemic and so, during the lockdown, they completely refurbished the dojahng.
Gone are the old red and green mats, a feature of so many old photographs, replaced by brand new grey ones. Bright new paintwork inside and out is complemented by new carpets on the floors, and walls. We now operate a one way, in and out system, and there is a new cosy parents'/spectators lounge for those waiting for students to finish thier lesson.
New toilets have been installed and new equipment fitted, including crash mats, Makiwara on the walls, and our new "friends" the blue dummies (we call themn our smurfs) for practising techniques without contact with others. Once restrictions have been lifted these will be useful for grappling practise.
We believe our dojahng is one of the most modern training facilities in the area, so why not book in for a free trial lesson soon?! 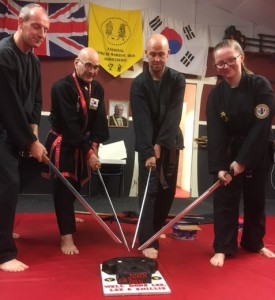 October 7th 2017 was indeed a special day in the history of the Academy. Not only did KJN John receive his 6th dahn in KSHKD, but three of his students achieved their 1st Dahn black belts, two of them in the art of Kong Shin Bup.
JKN's Lee Mcneil and Lee Mountain are two of only a handful of people to achieve this rank in the UK, whilst Youth JKN Emillie Downie achieved her 1st dahn in Kuk Sool.
They are seen here "cutting" their celebration cake along with KJN John as only martial artists can do! 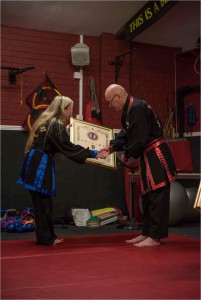 On October 7th 2017 KJN John was promoted to 6th dahn KSHKD and was delighted to have his certificate presented to him, by his partner and joint academy owner, Angela Prince along with loyal student JKN Chris Smith. This promotion meant that he could take the title "Su Sok Kwan Jang Nim" or "Senior Master", but John has decided to wait until Angela reaches her Master level before changing his own title. At that point, when a Master has trained a student from white belt to Master level it is traditional to take the title "Chong Kwan Jang Jim" or "Chief Master" in order to differentiate between the student and the teacher.
Prior to this KJN John had achieved his goal of gaining a second 5th dahn, in the art of Kong Shin Bup at a test in Canada in 2013. He was due to travel to Canada again in 2017 to receive his 6th dahn KSHD, but personal issues prevented this, which is why his presentation was made at his own Dojahng.

August 14th, 2010 was a VERY important day for school owner John Ward and Instructor Angela Prince. This was the day that they both received promotion to their next dahn grade at the special ceremony during the Meeting of Grandmasters. Read all about here....
For John this was the culmination of over 18 years of hard work and dedication to his art. His original aim had been to get to Master level by his 60th birthday. But this promotion means that he has achieved that goal some 5 years early as he is "only" 55. But not to rest on his laurels, John's next aim is to achieve the same goal in the much harder style of Kong Shin Bup, which includes all the same techniques and forms as KS Hapkido, but the techniques are performed somewhat more "realistically" and the test is even harder. Breaking is much heavier with some of the breaks being performed on FOUR 1" boards held together with no spacers. The test also invloves a 5-6 hour fitness and challenge course, including a 10km run and an hour spent in the water  performing kicks waist deep. This is followed by a "Ninja Warrior" style challenge course.
This will take a LOT of training on John's behalf, but he is determined to give it his best shot, so that he can then have the oportunity of teaching both styles to his students.
It was a fantastic event and a great trip.