Images from Morecambe Martial Arts from years gone by!

Ki Cho Jah Ki, breathing exercises are carried out at the beginning of most lessons
Kicking techniques are important in many martial arts, including Kuk Sool
Self-Defence techniques are taught at all ages
Meditation helps to develop self-control
The Korean Sword is just one of many weapons in the Kuk Sool armoury
Kuk Sool is ideal for ladies self-defence
Sychronised empty hand forms help balance, awareness and improve fitness levels
Learning to control your techniques is vital to safe practice
Breaking is a test of power and technique
Learning to fall correctly is vital in training and can be helpful in everyday life!
Good etiquetee inside class is expected, as are good manners outside
The long staff is one of the weapons from Buddist monks
PSBN John with students present at his last lesson at KSW Dereham, Norfolk
Kuk Sool Won has featured on the covers of many top martial arts magazines
Georgia Lowthian, ready for action!...
Georgia proudly displays her medal...
...and her brother Kieran...just as proud!!
Some of the KSW Lancaster UK Championship team
Tom Barcaly with his THREE (yes 3!) Gold medals from the European Championships.
Some of the 2005 KSW Lancaster European Championship Team with their medals
Flying side kick from DBN Tom Barclay
Blue Belt Harry Harrison sucessfully breaking a board!
Red Belts come in all different sizes!!
DBN Tom finds out a different use for a belt...
A 'thug' from the crowd wades in...
....and wishes he hadn't!!
a successful break for DBN Angela
Spin Kicks from DBN Liam..
Sparring action from DBN's Georgia Lea and James
Kevin Horner demonstrating techniques to a large crowd during a Lancaster Street Festival
DBN Ryan throwing Brown Belt Michael during their popular routine
PSBN John and the Staff form
DBN's Liam, Tom and Carl thrilled the crowd with their three man sword and staff routine!
JKN Guy Bishop, one of PSBN John's former pupils who was a guest instructor for the week
Breaking demonstrations are always popular with the audience
...if not with the holders!
Bowing is simply a sign of respect for others
Well....Rachel was hungry!
Not feeling too well?
Scenes from Haloween night..
Big James...I think!
Those spiders get everywhere..
Part of the sucessful UK Championship Team 2006
Well, at least the Centre Judge got it right!
Danielle Miller and Kuk Sa Nim
Here comes trouble!
The Gang of Three....
....and the Gang of Four!
...and three more.
Tracey and Roxanne
Christmas party Conga 2006!
Its not just the Kids who like to have fun..or is it?!
'ere...is this real then or what?!
PSBN John during his recent visit to PSBN Jackie in Murcia, Spain
Bullseye!!!
Well...even on holiday...we ALL need more practice!
PSBN taking son, Sean for a ride on Brandy, who had earlier trod on his foot..ouch!
The whole family gets to know Brandy. Amazing ,as Caroline is terrified of horses!
PSBN John with the first three Black Belts from Lancaster School. JKN''s Angela and Paul Prince and Ryan Hunter
The 2007 Lancaster Seminar with Ku Sa Nim
KSW Lancaster''s new holiday home in spain!
2008 Barcelona Demo team (Including PSBN John, + JKN''s Ryan, Angela and Paul)
Psbn John with the three candidates who tested in Edinburgh, DBN''s Georgia (now JKN!) Danielle and Robert
SO now we have FOUR JKN''s!
Scene from Morecambe Cricket Club Demo July 2008
KSW ladies getting their own way!
The latest member of PSBN''s Fan Club!
Jump kick breaking from DBN Sabrina
We are all best of friends really!
You WILL give me my pocket money Dad!
Yeah! That goes for me too!
Some KSW students at the start of their climb up Helvellyn....for a sparring match!

And part of the way up 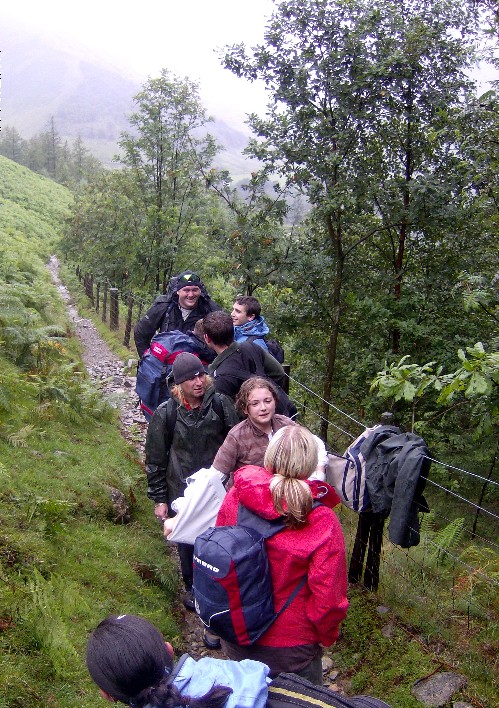 Looking back toThirlmere
Strange place to land an aeroplane...a plaque on the way up!
Made it! At a very cloudy and very cold summit!
Learning rolling breakfalls
And a word from our sponsors....
And we made it back down again...(thought we had done well until we saw people going up on mountain bikes!)
Handstrikes are an important part of training
Kettlebells help improve strength and flexibility
Traditional forms practise
Self-defence techniques