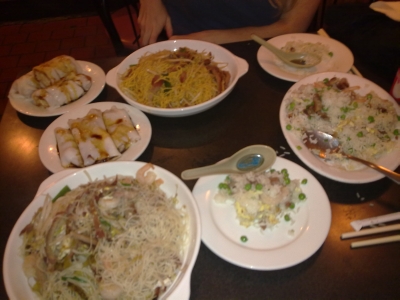 Whilst down the south end of Broadway, John & Angela decided to visit China town...well Angela had heard that there were plenty of gift shops there. (In fact, by the end of their brief visit to the city they had probably visited every gift shop in the city!) There were indeed many places to buy gifts for loved ones and for themselves. Unfortunately most of the items which took KJN John's eye were too big to fit in his suitcase! None the less they had a good time looking at the wares on offer.
Whilst in the area they also visited a local park which was full of Chinese people playIng drafts and a number of live performers, singing as only the chinese can do!
A highlight of the area was visiting a local restaurant. They knew it must be a good one as it was full of chinese people!
The food was fantastic and very good value...although there was just a little too much! This is not a problem in the USA as everyone assumes that you want a doggie bag to take your uneaten food with you! 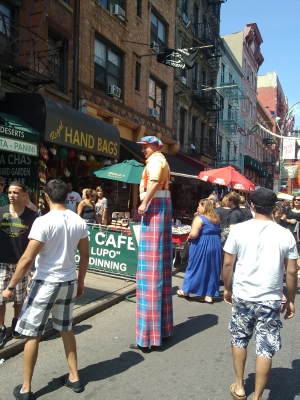 Just around the corner from China town was "Little Italy" This is a very lively area with restaurants and street performers a plenty, plus of course more shops!!!
After spending some time here, with evening approaching the couple decided to find their way back to Times Square. Unfortunately the tour busses had by now stopped running and they found themselves walking about 25 blocks! It was an interesting walk though, giving a different perspective to the city than when on a bus. 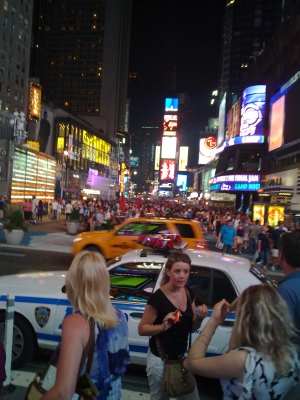 After their LONG walk they arrived at Times Square which is a VERY lively place at night.
Feeling thirsty they stopped into an "Irish Bar"...hmmm, someone should tell them that in Irish bars you do NOT get shown to your seats!
However, once they had found the seats that THEY wanted it was an entertaining couple of hours with Irish music from a live band.
Then outside again to the Square. Lots of lights, lots of people and LOTS of shops!!
Angela liked this area and kept wanting to go back. Can't think why. 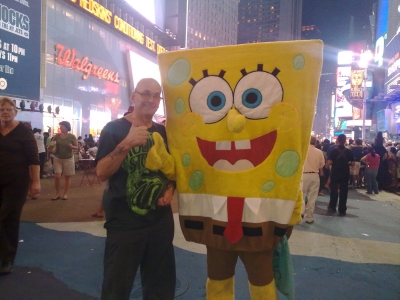 While in the square they bumped into some very unusual people!
A family re-union......click here...