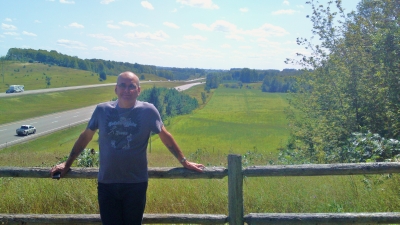 The last part of their journey was due to take John & Angela all the way down between two of the great lakes, Michigan and Huron. It should be understood that the term GREAT lakes is not used flippantly. Michigan for example is some 307 miles long and 118 miles wide. Its surface area is over 22,000 square miles, which is almost half that of England which is just over 50,000 square miles. So driving the length of it is like driving the length of a reasonable sized country and NOTHING like driving alongside of, say Lake Windemere ( as beautiful as that is).
The journey actually took them around 500 miles, through some beautiful countryside and through  three states, namely Michigan, Indiana and into Illinois.
KJN John is shown here at a resting place along the highway.
They had hoped to reach the "windy city" in one journey but it proved to be a bit too far and so they rested for the night in Michigan City, which confusingly, is not in Michigan state but in Illinois! 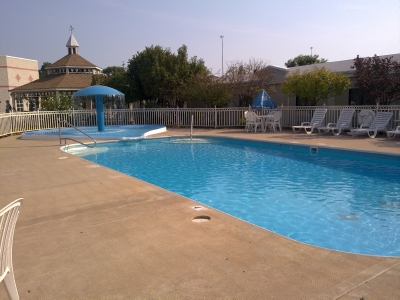 The next day after a leisurely start they quickly found themselves in the suburbs of Chicago.
After a bit of searching they found what turned out to be the best hotel of their trip, the Ramada in Hammond.
It was a few miles from the city centre, but not only was there a regular train service a short distance away, but the hotel actually ran an on-demand and free shuttle service to the railway station, which was available until midnight!
The hotel was very well equipped, had great rooms, great breakfast, was very low cost and even had its own swimming pool! 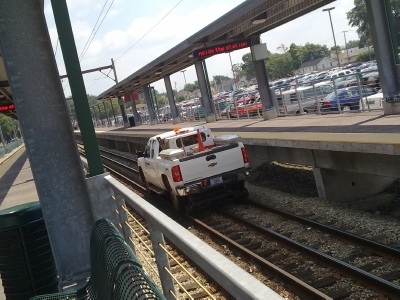 Spotted whilst John & Angela were waiting for a train....but definitely not what they expected to see. Yes, this van IS driving along the rails!!! 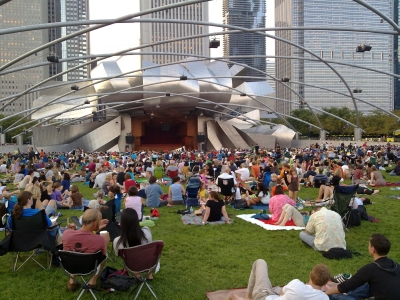 In a trip such as this it is very hard to say what is your favourite place. But if pushed, both KJN John and KSN Angela would have to say that their favourite was indeed Chicago. There is so much going on that you could easily spend two weeks here and not see everything. And, unlike New York, which is also a fantastic place but one where everyone is trying to sell you something, there was so much that was free. A good thing at the tail end of a trip!
The train into the city was very easy to navigate and coming out from the underground station they found themselves right next to Millenium Park. There were free music events every day at this park so you hardly needed to go anywhere else. 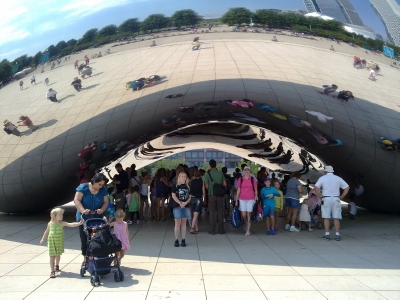 Other sights in the city included this amazing "Bean" statue which reflected the skyline of the city and which you could walk/crawl right underneath! 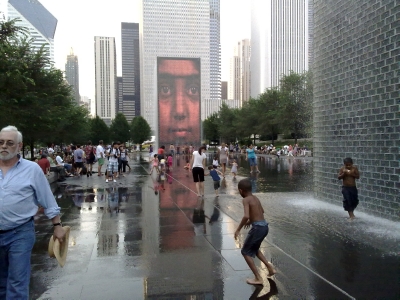 There were two of these giant "waterfalls" with faces which lit up at night and which everyone used to keep cool in the sweltering heat. 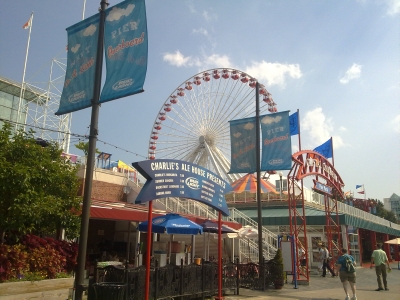 Navy Pier. A very popular place. The picture doesn't do it justice but it is so big it has a two lane road and a huge car park on it! 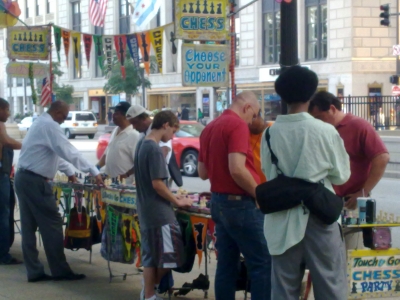 You could challenge these guys to a game of chess in the street... 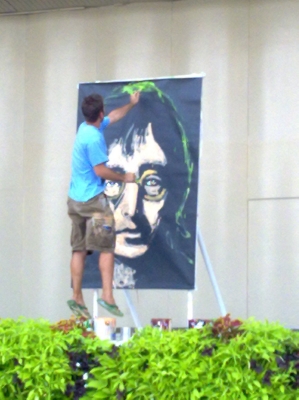 This speed painter was "just an interval act" in a free music session, which was also part of a huge art festival. Yes, he is airborn! These free events go on for the whole of the summer in the city. 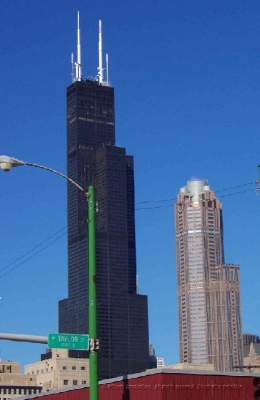 The Sears Tower (now known as the Willis Tower) was, for 25 years the tallest building in the world. 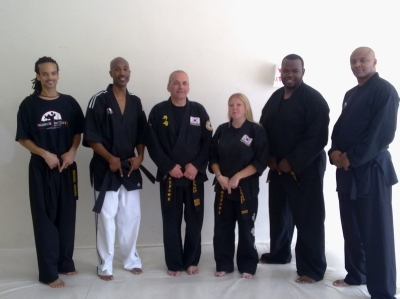 You would by now, be forgiven for thinking that John & Angela had given up on the training side of their trip. But actually all the sights listed above were visited in just a day and half.
Before leaving the UK, KJN John had already contacted Master Oren Headen from the Warrior Institute of Chicago to arrange for some training whilst they werre in town. Since their arrival in Chicago, Master Oren had also put them in touch with Master Mike Hill who he trains with on a regular basis. KJN Mike runs a dojahng not far from Master Oren. John was in touch with KJN Mike almost as son as he arrived. KJN Mike was very welcoming and arranged to meet the pair to take them into the city on the Friday.
However, the location chosen to meet could have been better, as it was a rather rough area of the city. Whilst waiting John & Angela realised that they didnt actually know what Master Hill looked like!
However, a car pulled up and they duly got in hoping they had made the right decision.
"You guys been waiting long?" Came the question from who they hoped WAS Master Hill.
"This is a rough area"
"Hang around here too long and you will be practising your dahn doh mahki" (Knife defence techniques!)
Fortunately it WAS KJN Mike and he was a great host taking them into the city and giving them a guided tour of the sights.
The next day they had arranged to train first with Master Oren and then go on to KJN Hill.
Finding Master Oren's dojahng was easy (no parking problems!) and first of all, they enjoyed watching and assisting with, the junior sessions  and then joining in with the seniors. The lesson was very good and they came away with some great methods for practising side and roundhouse kicks, which students back in the UK have already benefitted from.
The picture shows John and Angela with Master Oren Headen (next to KJN John) and some of his students. 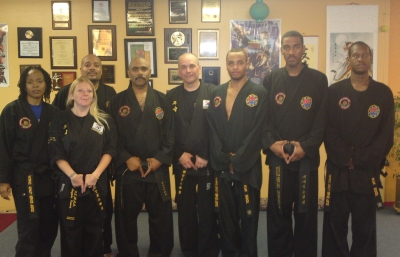 Immediately after spending about 3 hours with Master Orean Headen the pair went on to KJN Mike Hill's dojahng for another two hours of training!
Again a junior class was finishing but then the pair joined in a very physical lesson which including sparring with some of his black belt students.
In addition KJN Mike showed them both some good training techniques for strength and flexibility which they will be introducing to the students back home very soon.
KJN Hill can be seen here between KJN John and KSN Angela and surrounded by some of his own students.
John and Angela were made very welcome by both schools and are extremely grateful for the lessons they took part in and the generous gifts which they recieved. This was a great way to end the training side of their 16 day trip. 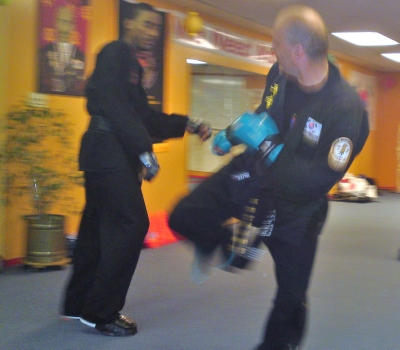 Here is KJN John sparring, with one of KJN Hill's students. 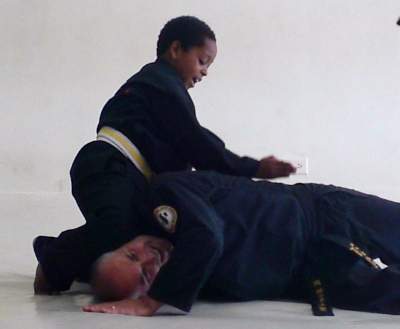 ...and being shown a good finish to Ki Bohn Soo number one by one of Master Oren's students! 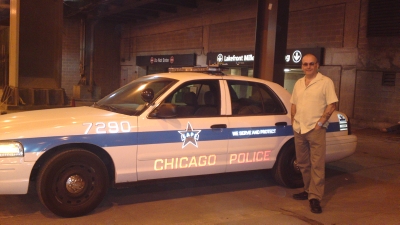 At least they managed to avoid any problems with the Chicago Police!! 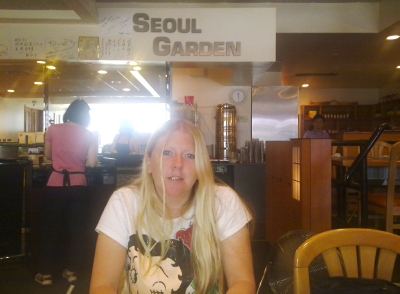 Sunday was their last day in Chicago and in the USA, so (naturally) Angela needed to do some more souvenir shopping...
Deciding to set the satnav for the rough direction of the airport, they then tried using it to find souvenir shops.
An hour later and hopelessly lost they found themselves in the middle of a Korean district complete with Korean Restaurants!
Deciding upon one called the Seoul Garden, in they went.
As an old hand at Korean food (haha) KJN John ordered something called Bim Bim Bap as well as Bulgogi. Both of these were (of course) delicious and they would both recommend the restaurant to anyone. That is if they had a clue where to find it again.
The restaurant was  a great "find" and the perfect way to end their trip of training and testing in the Korean Martial Arts.
Realising that their time was nearly up they set off for the airport. Unfortunately they were unable to take the weapons which they bought in New York back with them on the plane and so had to leave them behind.
There was so much more that could be written about their trip and so many more pictures. But we hope that this section of the website will let others know that training in martial arts, can lead to much much more than we think when we first start!