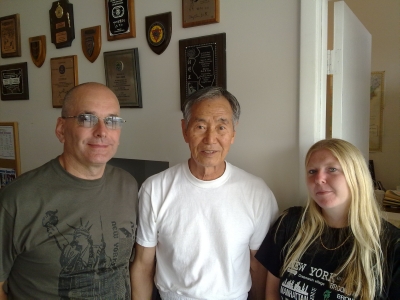 Heading out through New York and onto the highway our intrepid pair put the disapointment of the day behind them and started looking forward to the next two weeks.
After a few hours on the road, and now in New Jersey, some refreshment was called for and they ended up in a service area in a place called Roseland. After lunch they had a walk around the are and found nearby a martial arts centre; "Complete Martial Arts". Peering through the window at the childrens' class which was going on they were invited in by one of the instructors. After chatting a while KJN John told the instructor that they were on their way to a "Meeting of Grandmasters".
"Really? Well we have our own Grandmaster here!" Came the reply..."He's just behind you"
Turning around the couple found themselves face to face with one of the greats of Korean Martial Arts; Grandmaster, Bok Man Kim.
He proved to be a very polite and extremely knowledgeable man who at 77 years old, still took part in sparring and had huge experience in martial arts. He is also founder and Grand Master of the martial art, Chun Kuhn Do. More information about the art can be found by clicking here. 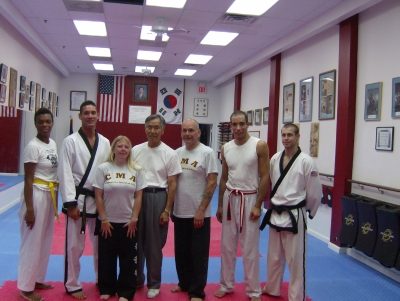 John & Angela spent a long time talking with GM Kim and came away with one of his text books, a T-shirt each and an invitation to come back later for some tuition.
GM Kim is a very lively instructor who tells it like it is! He put right some problems with their kicking and then they joined in some sparring with his students, including some two on one sparring. It was supposed to be light sparring, but as John outranked most of the students there, they seemed to feel that it was OK to add a bit more realism!
They were a great bunch of people and our pair left two hours later, feeling very hot, but glad that they had happened upon the school and made some new friends.
Now they were no longer quite so disappointed with missing out on the training they were supposed to do earlier that day.
All that was left now was to find somewhere to stay!
The picture shows KJN John, KSN Angela with GM Kim and his instructors and students.

Having had a great afternnoon/evening they John & Angela now had the problem of finding some accomodation for the night. Relying on the satnav to come up with something, they ended up at a hotel near Lake Hopatkong.
Since staying there they have discovered that it is actually quite a beauty spot. Apart from their hotel that is!
A receptionist who was on his first day and couldnt work the credit card machine , which ended up with him trying to take $5000 instead of $50 from the card! (No, it didn't work)  Refrigerators that were not cold but gave off so much heat that the room was warmer inside than out, despite the air conditioning which didn't really work anyway. Uncomfortable beds and no breakfast.
They were glad to get out of THAT place! Not surprisingly they didn't stop to take pictures..... 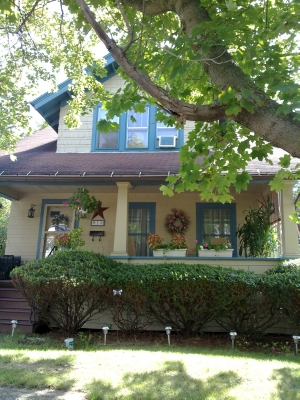 The next day they were due to visit Grandmasters Jeff and Sue Everetts.
Not surprisingly they got an early start that day and set off for Bradford New York, which was close to the Everetts home, they thought......
Not having the full address they set the satnav for the first road that came up on the map intending to ring GM Everetts when they were close. After some time on the road they arrived at the destination, although it did seem somewhat "rural" to say the least. In fact they hadn't seen a house for about 30 minutes when they stopped to phone GM Everetts with an update of their position.
The conversation was fairly brief but quickly established that they were in Bradford New York, whereas the Everetts' were in Bradford Pensylvania, about 110 miles away!
So finally, and some what later than expected, the pair arrived at GM Everetts home, which is shown in the picture, and were made very welcome.

TRAINING, TEACHING AND A PARTY! 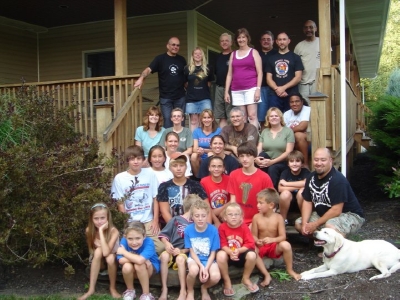 Grandmasters Everetts run the International Hosinsul Federation and teach a wide range of Korean martial arts including Hapkido. More information about the IHSSF can be found by clicking here.
Not knowing what to expect the couple were shown to their rooms, and after a while when they had relaxed, were whisked off on a journey through some beautiful countryside to the home of one of the school's students.
Here, everyone took part in some training and John & Angela were enlisted as seminar instructors for an hour or so before a great barbeque and party in the huge garden of the students' home.
Although it was a great evening, they were a little perturbed at the request not to leave food lying around "because of the bears".
Then it was back for a fantastic nights sleep at GM Everetts home,  followed by breakfast cooked by Grandmaster Jeff himself. An honour indeed! Blueberry waffles and homemade maple syrup are a great way to start the day.
Wishing they could stay much longer and loaded with goodies from the Everetts fridge "for the journey" they set off for their next destination...Niagara Falls

It is hard to pick highlights from a trip so full of great events, interesting people and famous places.
However, a visit to Niagara Falls has to be on the "Must do" list for anyone visiting the area.
There are actualy three falls which are known collectively as Niagara Falls. They are The American Falls, Bridal Veil Falls and the most famous and by far the largest, Horseshoe Falls.
Some 600,000 gallons of water flow over Horseshoe Falls every second!
Twenty percent of the world's fresh water is contained in the Great Lakes and most of that flows over the falls.

MAID OF THE MIST 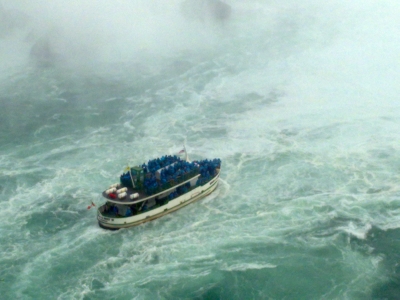 Although a lack of time and money prevented them from taking a trip on the Maid of the Mist, John & Angela managed to get a good look at the boat as it sailed almost too close to the falls.

ANOTHER "MAID OF THE MIST"! 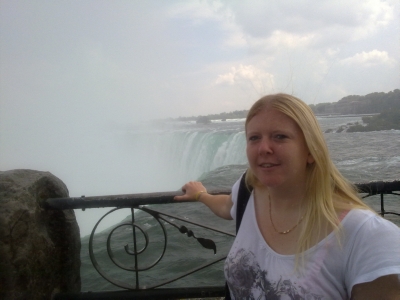 There are many different ways to see the falls if you have the time (and the money).
You can stay in a hotel overlooking them, take a trip in a boat which sails precariously close to the thundering waters, go down into a small tunnell that takes you undeneath the falls or even take a helicopter ride above them.
John and Angela though, were content to simply stand behind the alarmingly low wall that separates the path from the flowing waters of the falls and just watch. They found it an awe inspiring and almost hypnotic experience.
The picture shows KSN Angela, our own "Maid of the Mist" just a few feet away from one of the true wonders of the world!
After that it was a picnic lunch, courtesy of GM Everetts before carrying on their journey towards Sault Ste Marie.

TIME FOR SOME PRACTISE 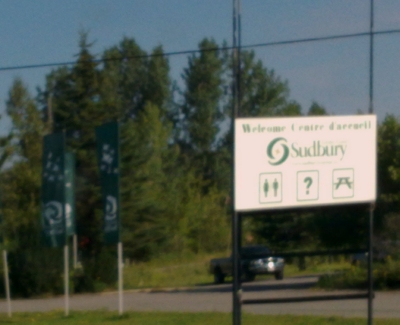 Unfortunately they ony had a short time at Niagara and a few hours later found them continuing their journey into Canada. It was NOT a quick journey as the first two hours consisted of getting stuck in "rush" hour traffic going into and out of Toronto.
But clearing this they carried on for several hours before deciding to stop for the night. After the previous experience in Hopatkong, KJN John insisted on checking his hotel room before checking in! However, there was nothing to fear this time as the rooms in the hotel in Sudbury Ontario, were clean tidy and most importantly cool!
Realising that their grading test was very fast approaching the pair decided upon some practise in the large car park outside their hotel. They did get a few strange looks, especially when doing staff sparring and sword practise, but fortunately noone called the police and they were able to practise everything they needed for ther grading tests.
They were not all that far from Sault Ste Marie by now and the next day after a few more hours driving (and lunch at a very strange cafe) they arrived at the home of the NKMAA!
Testing Time! click here...