At Morecambe Martial Arts we have a number of highly skilled younger Black Belts.
Although they will not progress to Instructor status until at least 18 years of age, they are a great asset to the Academy.
As part of their Leadership training, they will assist with coaching other young students,  and this experience will be of great value when they become fully fledged Senior Black Belts and Instructors. 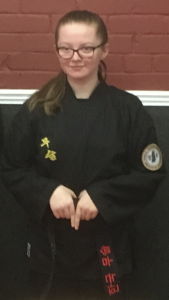 JKN (Jo Kyo Nim)  Emillie has been a loyal student for many years. Starting at a very young age, she has worked hard for her rank and is now elligible to start testing for either Senior 1st Dahn, or possibly even 2nd Dahn. She has competed in many tournaments and been placed on many occasions. Her empty hand and weapons forms are of a very high standard making her a formidable opponent.
Often seen helping with younger students Emillie is an important member of the team at Morecambe Martial Arts. 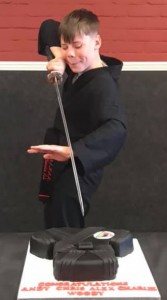 JKN Charlie has been with the Academy since he was 5 years old. He graduated to Youth Black Belt in 2019 and has continued with his training. He is well on the road to completing the Senior syllabus and hopes to test for that in 2020.
Although he is adept at all aspects of martial arts, his favourite activity in the Academy is sparring. He can often be found sparring with the senior students, and very often coming out on top!
In this picture he is seen finding a unique way to cut the celebration cake at his promotion event! 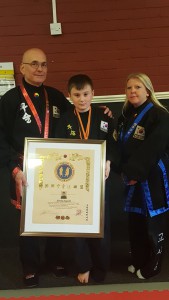 JKN Woody started his martial arts career at the tender age of 7. He  has always been a regular, training as often as he can. Often practising at home, he moved through the coloured belt ranks very swiftly, promoting to Youth 1st dahn in 2019, along with JKN Charlie.
Weapons training is a definite strong point for Woody, especially staff. Like th others he is on target to begin testing for his Senior 1st Dahn.
His enthusiasm for training has spread and he has brought his father "into the fold", although he curently outranks his Dad by several belts.
In this photo he is seen with KJN John & SBN Angela just after his Black Belt promotion.