IMAGES FROM KJN JOHN'S TRIP TO KOREA IN 2005 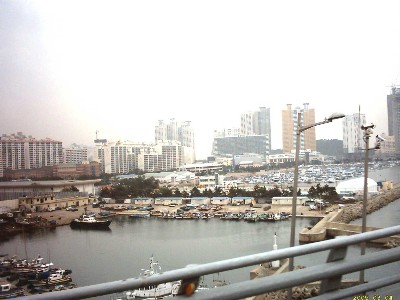 On this page you will find photos from KJN (then PSBN) John's trip to Korea in 2005. During this trip, he took part in the World Championships, travelled all over the country and spent time in a Buddhist temple. Korea is a fascinating country, which although quite modern, still retains a lot of the old oriental traditions. Walk into a shop, for example, and you will be met with a bow and the greeting, " Ahn Nyong Has Seyo?" Which literally means, are you in peace. Most Koreans speak little, if any English, so you have to really make an effort to learn some of the language if you are to enjoy the experience to the full. This is not helped by the fact that most signs etc. use "Hanghul", the Korean alphabet, rather than English style letters. They do, however tend to use English words, but written in Korean when there is no traditional Korean word for that item. This can cause confusion! On one occasion for example, KJN John spent 5 minutes trying to work out what was on a menu at a service station, only to realise that it actually said, "Chicken Burger"! The World Championships were very well attended and the competition was hard. Although John didn''t win any medals this time, he felt that he performed well. The Third Dahn category was open to all ages, so maybe at 50, he was feeling his age competing against all the 20 year olds! The UK team as a whole did very well however, and came in 5th position out of around 40 teams. The trip was interspersed with a number a banquettes at which delidious food was served and the group was entertained by , drummers, an electronic jazz band, Korea''s top Diva and a leading Boy Band!

A view of the city of Busan, where the World Championships were held.
Our hotel in Busan. Impressive eh!
Hyundai Beach was just 2 minutes walk from the hotel door.
New Masters (5th Dahn) from the UK on the front line, along with other UK Masters and 9th Dahn Master Byung In Lee.
Outside the stadium.
The local children were very impressed with Kuk Sa Nim and Kuk Sool Won.
A traditional Korean home.
PSBN John next to a temple in the park.
There must be something up there!
Believe it or not, this is all fish!
PSBN John getting close to some local art.
Some local wildlife.....actual size!
Baek Dam Sa Temple. (Temple of 100 ponds) where the team spent the night.


Baek Dam Sa is a beautiful Buddhist Temple set between several mountain peaks. When we arrived we had the luxury of coaches to take us the 7km up the mountain.
There we were greeted by the Great Monk (no long speeches!) and practised meditation in the evening.
We were given a tasty, if frugal meal before retiring for the evening. We were not allowed to leave anything, as it would have been given to the Monks the next morning as they are not allowed to waste anything!
Some of us were up at 2.00 am having spent the night on a dormitory floor, with many others, some of whom snored....a lot! One of the monks roused the rest of the Temple at 3.00 am with banging on drums and ringing the huge temple bell.
PSBN John was honoured to be the single guest at a service of thanks with the Great Monk and Master Byung In Lee. Following this we took part in some walking meditation for about an hour, which was then folled by talks by several monks about meditation and the meaning of life. Very deep, but extremely interesting!
We then were instructed to spend a further hour in our own meditation and were not allowed to speak until breakfast, which was served around 6.00 am and consisted of delicious cake!
After breakfast we all took part in a stone "pagoda" building competition. The object of this was to pile as many stones from the river bed on top of each other as possible. The competition was judged by the Masters on height, beauty and artistic creativity. PSBN's team did't win!
It was then time to return to the bus. PSBN John joined the more energetic students who walked the 7km back down the mountain and was rewarded with some breathtaking views.
The Kuk Sool Won members are most priveleged to have been allowed to stay at the temple.

Early morning mists at the temple
PSBN John with four monks who were visiting the temple at the same time as Kuk Sool Won
(Very) early morning mists
PSBN John with his (not) winning pagoda building team
The huge drum and bell, used for 3.00 a.m. wake up calls!
On the way down
Motorway services - Korean style!
A small, rural community
Kimchi jars outside a home
Approaching the large city of Seoul