A CHANCE TO RELAX

With the final seminar over and goodbyes said to the visiting instructors, John, Angela and new friend Mehdi, decided to go for a meal. The ended up in a nice restaurant anjoyng their meal when who should come in but one of the instructors that they had "missed out on", Chiefmaster John Goodwin of Tang Soo do fame. So as well as enjoying their meal they had some good conversation, about martial arts....what else?! 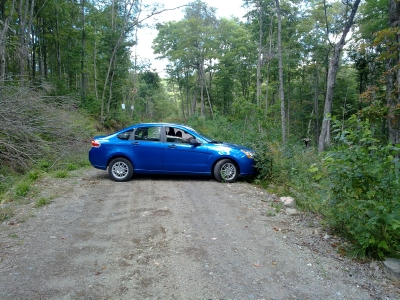 This was followed by a drive around Sault St Marie. Visits to local parks and eventualy to the forest where Mehdi broke the remaining boards that John & Angela had failed to break during their grading!
On Monday, after Mehdi had gone home, they took a further drive out into the countryside. SSM is a confusing place as all roads seem to end up turning into Highway17! So they followed this highway to the north and ended up on the OLD Highway 17. This turned from a fairly narrow road, to a very narrow road to a dirt track and eventually to a dead end. Turning round posed some problems as you can see from this photo! 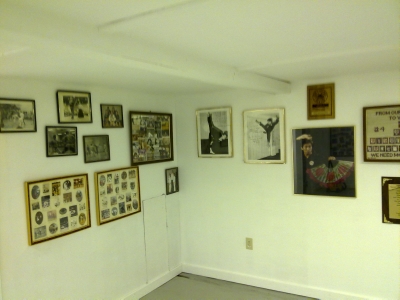 Not content with a three day seminar over the weekend, being truly committed to martial arts John & Angela returned to the SSM Dojahng for some more training that night and to snap a few pictures of the facility. This one shows some of the many pictures of events over the sixty years that Saja Nim has been training and teaching.
Before going back to their hotel they also managed to book themselves onto the Agawa Railway for  a trip into the Canadian mountains the following day.

A RAILWAY JOURNEY TO REMEMBER 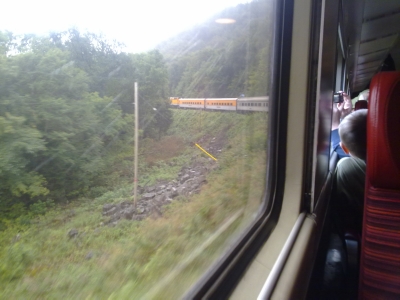 Tuesday morning, an early start was called for as the pair had committed themselves to catching the 8.00 a.m. train from SSM into the mountains. They had been warned to take food with them as it was expensive on the train, so armed with a picnic, off they set.
The journey was indeed a fascinating one as the train wound it was slowly through the mountains and canyons of the Agawa valley. In total the trip was 114 miles each way, which took 4 hours and gives you an idea of the speed of the train. But indeed speed was not what was required as there were many photo oportunities which passed by all too quickly even at this sedate pace. 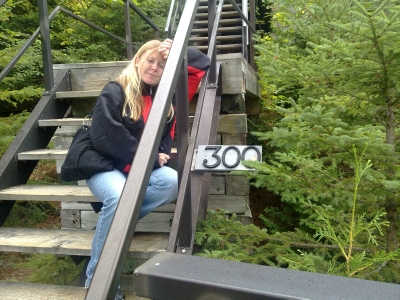 After four hours the train pulled up at the Agawa Canyon Park to allow travellers to enjoy its full beauty close up.
There were many options of walks to waterfalls, along the river bank or a climb up more than 300 steep stairs to the breathtaking lookout perched 250 above the canyon floor. After their picnic lunch, John & Angela naturally chose this last option...just to give their legs a bit more exercise!
Here is Angela, just a few steps away from the top. Maybe someone should wake her up! 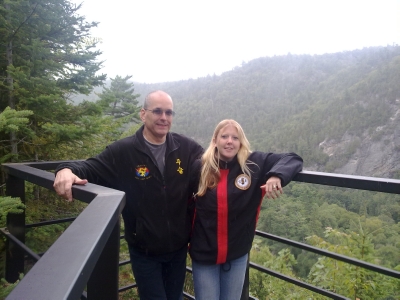 Arriving at the summit our pair took a few minutes to enjoy the view. And to rest their legs ready for the downward journey... 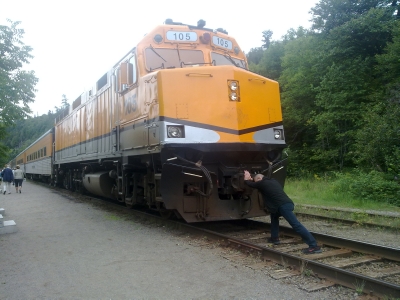 After some further exploration of the area, and almost missing the train home (which would have been tricky as there were no more trains that day and they were miles from anywhere with noone around except bears) they eventually got back on the train for the journey home.
For some reason John seemed to think that the train need a push start...

ON TO WINDY CITY 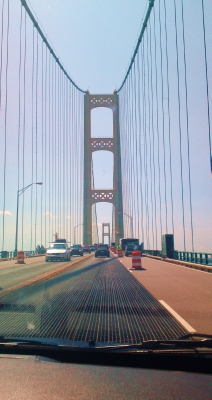 After their long journey they returned to the Dojahng for one last training session.Then, after a chinese meal and an early night the next morning they set off for the bridge to the USA for the last leg of their trip. Chicago!

To Chicago, Training and Home...Click here...