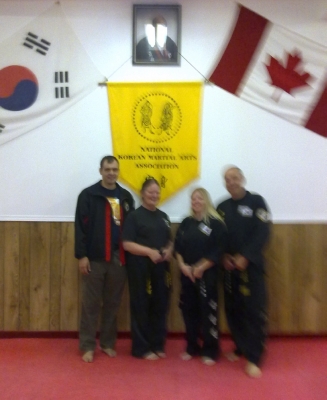 So almost a week after arriving in New York , and arriving at their comfortable hotel in Sault St Marie (SSM) at around 3.00 p.m. on Thursday 12th August, the couple realised that they only had a few hours to go before their grading test began. Not only that, but they did not actually know where it was being held! A few frantic phone calls later and they were on their way to the Dojahng of GM Timmerman's own school in Gore Street.
A quick look at the satnav and they started to relax as it was only a 10 minute drive away.
Arriving at the premises they were greeted by GM Timmerman himself, who jokingly told them,"Sorry, we're closed!"
Despite this quip they felt instantly at home, but then, as more people started to arrive the nerves set in.
During the test there was obviously no time to take photographs, and the rather shaky picture shown is almost the only record they have of their visit to the dojahng apart from some photos of the many awards, plaques and photgraphs on display.
Still...another reason to go back again!
Over the years with the WKSA, KJN John and KSN Angela had got used to having people around them at testing time, who they knew well. So it was a rather uncomfortable feeling to have a room full of students and instructors who they had never actually met in person, although they recognised several from their photos on the internet and from training DVD's.
It was a very different test from what they were used to. The first difference was that there was virtally one grading judge for each student testing so you knew that you would be very closely scrutinised. The next difference was that not everyone was testing under the same syllabus, some were testing on Kuk Sool, some on Hapkido and some, like KJN John on Kuk Sool Hapkido. This meant that not everyone did everything, so to the students it was a bit confusing. Not so to the examiners of course! 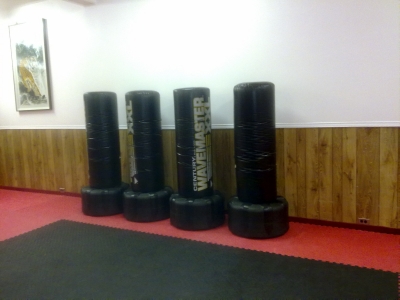 The first hour was taken by then SBN (Now KJN) Chris Demaneous who gave everyone a workout they will never forget. KJN John said afterwards that it took nearly 5 days for his legs to fully recover! After this session there was a break for water at which point a number of students chose not to carry on with the test as it was too arduous.
The second hour was kicking and handstrikes taken by KJN Kevin Janisse. It should be noted that both of these instructors actually did everything that they were asking the students to do AND they were both testing the next day! The kicking section was also very hard and included such gems as "off the wall kicks" and even running along a row of large freestanding kick "bags" This last technique was to simulate running along the wall, which is part of the syllabus requirements but the walls in Canadian buildings are apparently not strong enough, hence the use of the "bags" which are shown in the picture...
This section of the test also led to a few "casualties" who found they could not continue.

Then it was on to the forms section of the test. During this section GM Timmerman asked students to perform "as if in a competition". This was not an easy "ask" after the workout which had preceded it but our couple did their best. They were pleased therefore when Saja Nim  decided that the UK was doing the best!
In fact even after the test, several people congratulated them on their performance, particularly KJN John, who they said had done very well "for his age"..hmmmm
Towards the end of the forms section, KJN John found himself alone on the floor apart from KJN Janisse's wife, Debbie who was also testing for Master level to peform the last form Woon Hak Hyung which is a very long form with a lot of  intricate stances. Not easy when your legs feel like jelly and a LOT of presure being watched by everyone in the room.
After forms it was on to the techniques section which were to be performed with full takedowns. KJN  John found that the hardest part was not doing the techniques or even remembering them, but simply getting up after each throw that KSN Angela performed on him. Tiredness was definitely setting in.
Eventually after almost 6 hours, the day of testing was finished. But not the test itself as they still had to go back the next day to Saja Nim's house to complete their weapons forms and breaking. 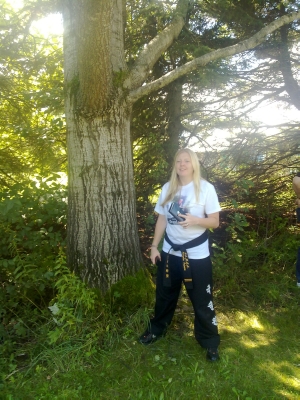 So after a good nights rest it was back to Saja Nim's house in the morning for the remainder of their test.
It should be noted that the test the night before finished well after 10.00 p.m. and the next morning there was another test starting at 6.00 a.m. including an hour in the lake and a 5km run. This was for those students hardy enough to test for Kong Shin Bup. Saja Nim despite his 70 years was there for the whole thing.
John & Angela however, had had a relative lay in and arrived (almost late) at 9.55 to join in with the weapons. Despite legs which were screaming at them to stop they finished the test alive and even managed to break most of their boards in the breaking section. In this section Angela had 7 1" pine boards to break and John had 10.
They both did very well and Angela even managed to beak a board with a Wahl Jahng Cha Ki (off the wall, or in this case, off the tree) kick. A fact she is very proud of and can be seen with the very tree she used in the picture!
Lunch was supplied at Saja Nim's house before moving on to the Ruiniti Hall in SSM for the remainder of the KSB test at which KJN John was one of the judges. He was very impressed with the standard shown by the students he was testing.
TRY A FREE LESSON THIS WEEK! CALL 07979544466 OR CLICK HERE TO EMAIL US